VIDEO OF THE WEEK
/>

ODT Entertainment is thrilled to announce the 4th Annual Salute the DJs Award Show taking place January 20 - 22, 2013 at The Atrium Events Center. Last year’s event was a huge success! There were celebrity artists in attendance such asBrick Squad Monopoly, DJ Smallz, Trapaholics, Debra Anteney (Ceo of Mizay Entertainment), Young Money recording artist Lil Chuckee, and over 2000 DJs, media and other Industry Tastemakers. This year’s show will shine an even brighter light on the life and importance of the DJ. This year’s theme, “Legacy of the DJ,” will be honoring DJs from all across the globe paying them homage for the vital roles that they play in the music business. “When I started the Salute the Djs Award Show I had no idea that it would get this big and take on a life of its own, but my sole reason for starting this was to make the music industry appreciate the djs,” says Salute the DJs Founder, Lady Shack.
For 3 days and 3 nights only ODT Entertainment will be recognizing those DJs who have exemplified outstanding qualities that reflect the true essence of what it is to be a DJ. This memorable event will include celebrity guest performances, aDJ gifting suite, Hip Hop for Homelessness Food Drive and Blanket Give Away, media coverage, models, and surprises that will shock and blow everyone’s minds!
Our exhilarating journey begins January 20, with our Soul Food Sunday Luncheon that will be held at The Courtyard Marriott, 133 Carnegie Way, Atlanta, Ga. We will wine and dine the djs, media and select industry tastemakers as we welcome them to Atlanta. Later that night we will be having our Sinful Sunday Party at one of Atlanta’s Premiere Adult Entertainment Clubs. On January 21, 2013, we will be going out and helping the community, Hip Hop for Homelessness. We will be having a food and blanket drive in which we will take food and warm blankets to the homeless shelters around Atlanta.Following this we will be having our “Salute the Djs Artist Showcase,” where we will allow artists to perform before the djs and showcase their talents. We will also be having an industry panel that will educate and provide information for upcoming artists. January 22, 2013, doors will open at 6pm for the 4th Annual Salute the Djs Award Show. This event will be held at The Atrium Events Center, the red carpet is at 6pm, the curtains will rise to begin the 4th Annual Salute the Djs Award Show at 8pm. We invite all lovers of music to join us for the 4th Annual Salute the Djs Award
“Celebrating the messengers of the music” The goal of THE SALUTE THE DJ’S AWARD SHOW is to restore classic recognition to the disc jockeys that are overlooked for all their daily hard work. We had a massive turnout at last year’sevent, and we’re expecting an even bigger turn out next year. 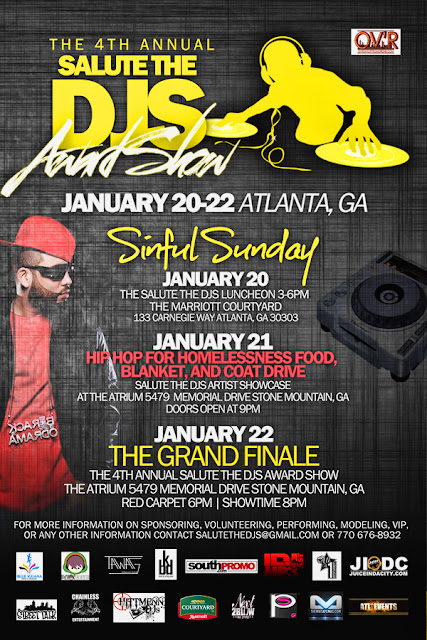 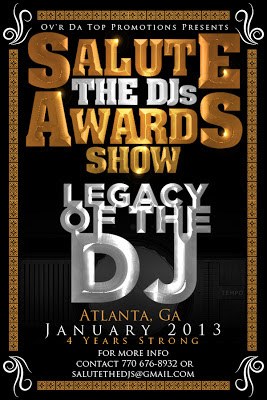 $500 PLATINUM DEAL:
-Picture, Bio, and Mp3 included in our Newsletter (This Markets both you and your music)
-Artist are allowed to perform 2 songs plus 4 guest tickets

$750 DIAMOND DEAL:
-Picture, Bio, Mp3 included in our Newsletter (This Markets both you and your music)
-Free entry into the venue
-Artist are allowed to perform 6-8 minutes
-Artist are allowed 8 guest tickets
-Artist gets a live interview at the show with our Camera Crew
-We will mention you throughout the show

Packages are final The last day to make payment for performances during January 22, 2013 Salute the Djs Award Show is December 28, 2012.

Posted by Next 2 Blow All Stars

Log onto to  321RealLiveRadio.com  right now and catch the hottest in today's Music! Hit us up for more info and track submissions ... 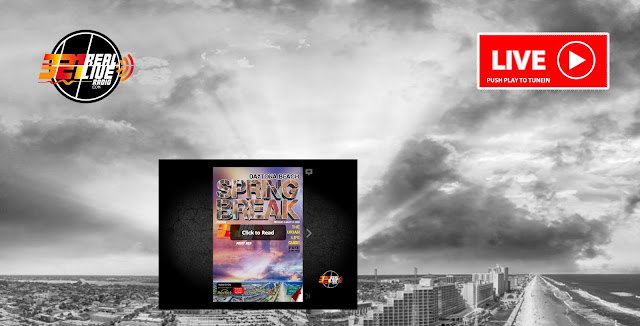 Check who's watching Next 2 Blow All Stars